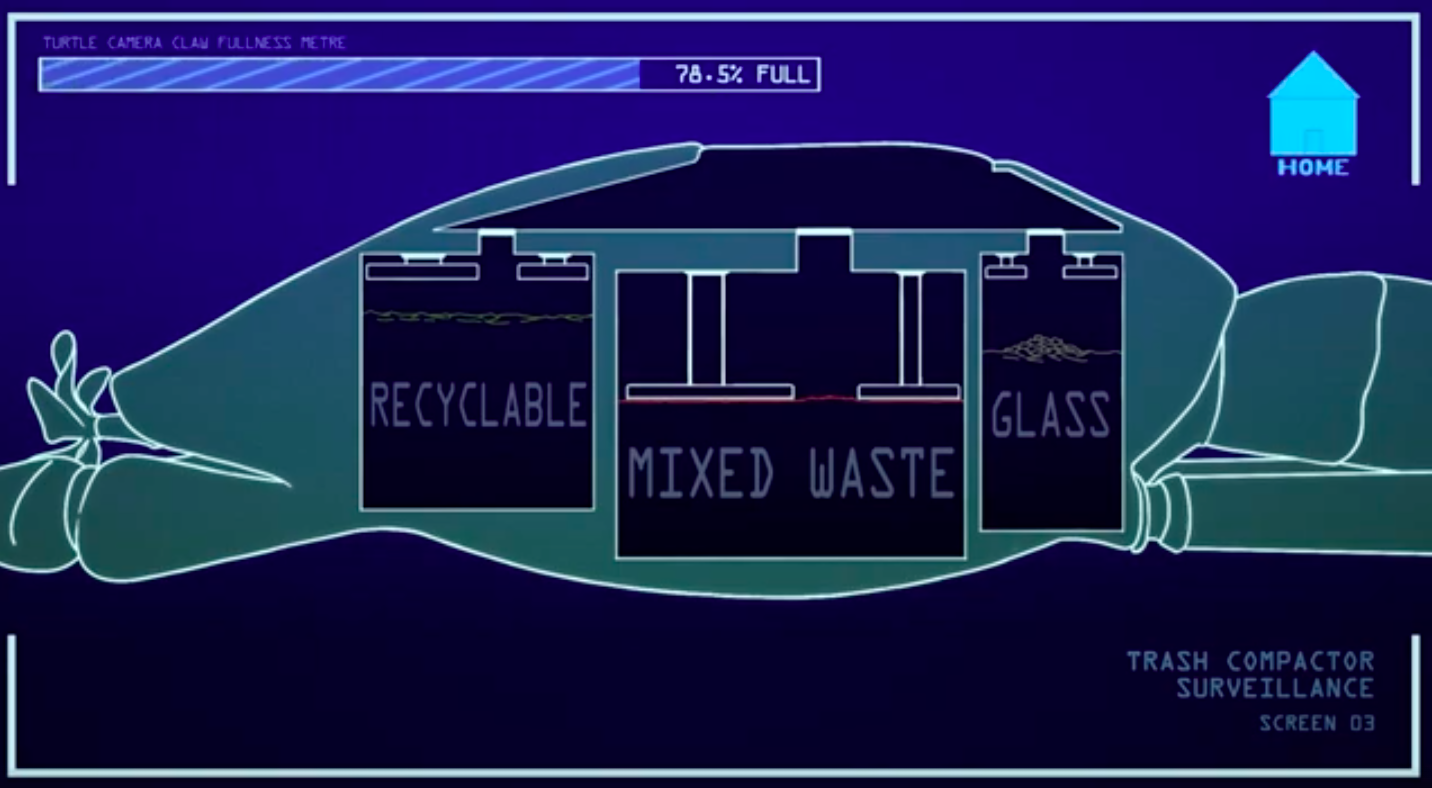 The Turtle Camera Claw helps clean our oceans by finding trash in the water, grabbing it with its claw and putting the trash in a compartment in its back. The turtle returns to land to empty its compartment when it's full.

Meghan what a clever little invention you've thought up! Great job! I think your Turtle would definitely help clean up our oceans and I like your drawing too! I wonder what other inventions you can think up? Keep up the good work :)

Visit our online exhibition Mission: Protect our oceans to find out more about how the Turtle Camera Claw was brought to life!

Annika Gonzalez has been working on making this idea real.
Animation Progress

The past few weeks as I was animating, I've come across a few bumps in the road. I realized that my original plan was definitely going to be too long and I needed to cut out a lot of things. This often happens in production because sometimes, creators realize what works and what doesn't work only when they begin.
There was a few days where I had to sit myself down and figure out how to showcase the turtle's abilities while keeping it interesting with an even shorter narrative than the first one. After a while, I came to the conclusion that showing how the turtle identifies trash and the inside compactor is the most important thing about this idea. So now, the animation is shot mainly through the turtle's point of view so the audience can see how the turtle's software functions. I also added a short digitally hand-drawn scene showing how the compactor works.
It's a little upsetting how I can't show every little detail I put in the turtle, but I'm still happy with the results so far :)
As for the image below, that is a compilation of screenshots breaking down one of the scenes in the animation. It was a work-in-progress screenshot I took yesterday afternoon so there's a lot more things I added to the shot. But essentially, the picture below is showing how at that time, I had four different images compiled into one shot. Two of them were rendered from the 3D software I am using and two of them were 2D still images.
As of now, I only have one more shot to do. When that is finished, I will do some colour corrections for the animation before I add the finishing touches which is the sound :D

I finished painting weights on the entire turtle tonight so now it won't move weirdly.

What I mean by move weirdly is that if you look at the plain photo of the arm, it's not bending properly. That's because the software is just guessing how it will move. Because of that, artists have to go in and fix that, or in other words repaint what the software guessed. In the similar screenshot of this image, you should see a black and white gradient. That's the paint that has to be fixed.

In the last picture, that's how the paint should look like for the turtle to move properly. But not all 3D models will have weights painted like that. Different objects move different ways, but because the turtle is a machine, it's shape doesn't change. In comparison to a human arm, there would be a gradient because a human's skin folds and stretches when it moves.

Now that this part is finished, I will be moving on to the animating process :D

This weekend, I've been rigging the turtle. If you look at the picture of the turtle made up of blue lines (we call this the wireframe), there are colourful shapes on the inside. Those are the bones and joints that tell the turtle model how to move. But we can't move the bones and joints by themselves since the software will get confused. So the next step of rigging after making the skeleton is creating the controllers.

In the next picture with the four different views, you'll see circles around the different parts of the model. Those are the controllers. The controllers help prevent the software from getting confused and making the turtle move weirdly. They also help me move the turtle faster since I don't have to click on every individual part to move it.

This week I'll finish rigging the Turtle Camera Claw. I have to do the final step which is painting weights, which is something I'll talk about next blog post when the process is finished :)

I spent this morning colouring the turtle. I coloured it according to Meghan's drawing. I also added a light to the lightbulb above the camera eye. I think it's coming together :)

The past week, I've actually been playing around with the design more. I'm much happier with this version and I think it better resembled Meghan's drawing. I made the turtle a lot wider since I noticed how thin I originally made it.

As for the claws, I made them more rectangular and only put 3 of them.  I also added another section for the turtle's arms so that it could better reach the compartment in its shell. Speaking of the shell, I finally added the lid!

This version of the turtle is basically finished so I will be colouring it this week, then I'll rig it. In animation, when someone says they're rigging something, it means they're adding a skeleton to it. Adding a skeleton to a model (or a 2D drawing for a 2D animation) makes it easier for the model to move.

The past couple of months, I've been playing around with the turtle design. The first version was very rough since I wanted to play around with the design of the claws. Here's the work in progress of the first pass of the model! As you can see, unlike Meghan's design, there are 4 claws instead of 3, and they're more like a cylinder rather than a rectangle. I wasn't very happy with it so I decided to continue tweaking it so that the claws were more like how Meghan envisioned it.