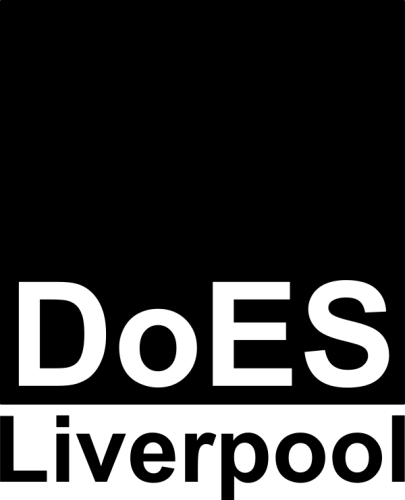 1 made real1 working on

First and foremost DoES Liverpool is a community of people with a diverse range of skills and interests. By being part of the DoES community you get to mingle with entrepreneurs and company founders, artists and makers, developers and hardware engineers, academics and students (and many people that are less easy to label).

DoES is also a co-working space located in the heart of Liverpool. Desks are available to rent by the month or by the day.  The DoES workshop is well equipped with a range of electronics equipment, 3d printers, vacuum former, CNC mill and laser cutters.

Making the Defence Dress, part 3: Putting it all together

In our previous post, we left Mike and Paul on what seemed like a never-ending task of soldering together 36 diamond-shaped circuits, while Jackie and Zarino laser-cut acrylic and fabric for the dress.

We’d decided to make our own dress, because all the pre-made dresses we saw were either too patterned, or too flimsy, and we knew our 36 diamonds, the 3 battery packs, and all the wires connecting them, would be pretty heavy!

Anyway, after we showed the Little Inventors team our prototype dress, they suggested it would be a good idea to make a new one to fit a girl of Olivia’s age, so we took what we’d learned from our prototype and made a final version – this time with a simpler shape, an adjustable waistline, and only a single layer of fabric to make threading the wires through the buttonholes a lot easier.

On the inside of the dress, we added pockets to hold the three battery packs, and loops to route all of the wires through.

By then, all the diamonds had been finished, so we laid them out on the dress, to make sure we had good coverage, and made a note of the positions. We couldn’t resist the opportunity to try some of the lights out, powered by our bench power supply – and we were AMAZED by the brightness!!

Lastly, each diamond needed a sewn buttonhole to pass the connecting wire through, and a sewn-on velcro strip, to attach the diamond to the dress. An afternoon later, the dress itself was finished.

Threading everything into the buttonholes in the dress took a while, but by the end, we had a fully functional defence dress, that operated on both battery power, and from the mains, with a button in the sleeve to turn the lights on and off.

Fast forward a few days, and the dress had been couriered to Newcastle, to appear in the Great Exhibition of the North. After a few last-minute tweaks (it turns out our dress was a little more delicate than a production model would be!!) it was TIME TO SHINE :-D

Everyone was amazed by the dress, and it was great to see it alongside other inventions people had made at the exhibition.

In our last blog post, we covered some of the backstory of who we are, and how we decided to make Olivia’s “Defence Dress” a reality, using a LOT of high-intensity LEDs.

The next step was to put together a prototype. We used CAD software to design three diamond shapes, roughly the size of A5, A6, and A7 pieces of paper, with little sets of holes ready to poke our LEDs “legs” through. We figured, we could leave the LEDs exposed on the front, and then solder them up, with resistors and a bit of wire, on the back.

Using the laser cutter at DoES Liverpool, we cut our first diamond shape out of some red mirrored acrylic, and started wiring up the LEDs through the holes. You can see a photo of the red prototype attached to this post!

It was amazing – it worked! But we noticed a few improvements we could make. First off, soldering so close to the back of the mirror acrylic caused burn marks to appear in the reflective metal layer, which was a bit messy. But more worryingly, the metal was conducting the electricity we passed through the LEDs, causing a short circuit.

So we decided to cut a back and a front, separately – the LEDs were soldered onto a plywood backing board, and they then poked through holes in the mirrored acrylic front. The plywood backing kept the diamonds fairly light, and the separate acrylic front meant we avoided any short circuit issues.

While Mike and Paul led on the soldering, Jackie and Zarino used the laser cutter, again, this time to cut a dress pattern out of white fabric. We’d searched high street stores for white dresses, but everything was made out of much too flimsy fabric for what we needed. Handily, DoES is right in the middle of Liverpool’s “Fabric District”, so we weren’t short of places to find fabric for our dress!

Next up: We turn the lights on, and face a tangle of wires.

Hi! We’re a group of makers who do cool things with electronics, textiles, and software in our spare time, at a makerspace called DoES Liverpool.

Earlier in 2018, we made a set of light-up costumes for a Liverpool samba drum band, using microbits and “neopixel” LEDs to flash coloured lights above each drummer in time with their individual beat.

So, naturally, when we heard about Little Inventors, and saw Olivia’s “Defence Dress” idea, we knew we *had* to make it a reality.

Even though we were used to working with neopixels—the individually-controllable multi-colour LEDs that come on strips—once we’d carefully read Olivia’s idea, we realised we really didn’t need LEDs that changed colours. Instead we could pick a set number of colours, and then focus on making them as BRIGHT as we possibly could!

We worked out a way of translating Olivia’s drawing into the real world – there would be three different sizes of “diamond”, each with either 16, 9, or 4 LEDs. Just like Olivia’s drawing, there would be four colours of diamond (red, yellow, purple, and green) and each diamond would have coloured LEDs to match. We looked online for the brightest “high-intensity” LEDs we could find, and ordered them, to arrive a few days later. 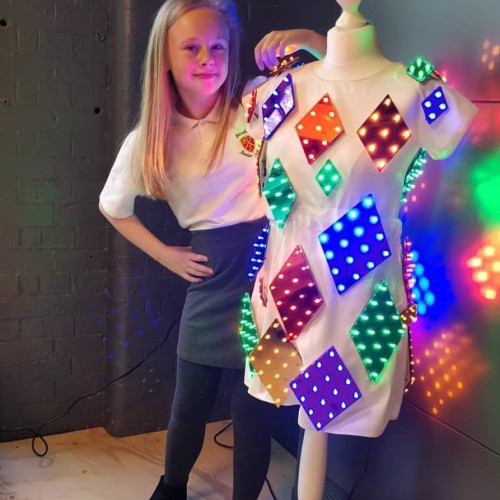